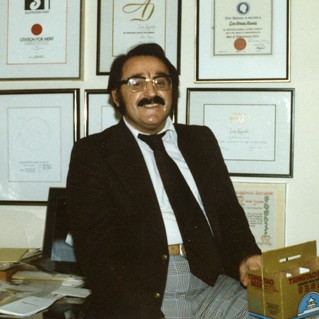 Leon Stanley Kawecki was born on July 2nd, 1921, in Chojnice. There he went to and graduated from the General School followed by gymnasium. He also attended the private art school of Elsa von Kittsteiner, where he studied the basics of painting and drawing. At such a young age, he received a bronze medal for a watercolor he sent to an art competition. The works were judged by a panel of judges in which Wojciech Kossak happened to be one of its members.

In 1935, Kawecki began studying graphics and medal making at the State Institute of Fine Arts in Poznań under the supervision of Karol Mondral and Jan Wysocki. His studies were interrupted by the Second World War. During the occupation, he unsuccessfully tried to continue his artistic studies at the Vienna Academy of Fine Arts but the turmoil of the war made him wander around the world. As a result he started working in various European cities, and in 1951 he settled permanently in the USA.

There he decided to study applied graphics at the Huntington Institute of the Cleveland Polytechnic and within a short period of time he moved to Pittsburgh, where between 1952 and 1957 he worked as a graphic designer in a publishing company where he deepened his knowledge in the field of graphics, painting and art history at the local Art Institute. In 1957, he joined the Mead Packaging Corporation, a paper products company in Buena Park, California. A year later he was promoted to the position of chief art director for the company on the West Coast. Kawecki was very active in the Polish community in America especially in the Polish associations of Pennsylvania and Western California, the Polish-American Society of Philatelists and Numismatists in Los Angeles, and of the "Polnus" Association - the largest Polish community organization in the world. He was also the vice-president of the Polish-American Arts League in Pittsburgh.

He specialized in artistic design of applied graphics and medal making. He would take part in annual "Polpex" philatelic exhibitions that were related to the history of Poland. He was a laureate of numerous awards and distinctions in artistic and applied graphics competitions, including philatelic and medal contests. In his successful artistic work overseas, he always had his country of origin in mind. For Kawecki the memory of great Poles became the guiding idea for ​​many projects he created. His works always mastered hand-lettering and throughout  his life he successively sent most of the original copies of his graphic works, drawings, medals, posters, or designed numismatic specimens as a gift to the Museum in his hometown of Chojnice.